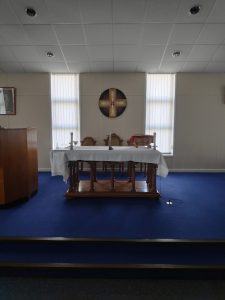 The need for a new church building in Westhill was recognised from the early 1970s.

Trinity Church as she came to be, a joint oecumenical venture between the Church of Scotland, the Scottish Episcopal Church, and The Catholic Church was first envisioned in 1978.

Works on the building began in May 1981, and Trinity was dedicated on Saturday 7th November 1981. It was subsequently expanded and refurbished in 2002. 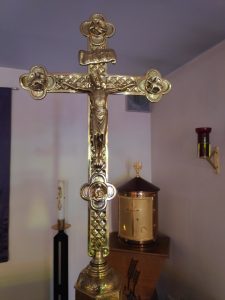 During the refurbishment, with Masses being said during the week, and the Lenten Lunch Services, and the Lying of the Departed the night before, the Small Chapel came to its current form.

The Sanctuary with Tabernacle & the Lectern are from an old church in Glasgow, and the Altar, kneelers, Stations of the Cross are from The Sacred Heart Church. The wooden pole with the Brass Crucifix was fashioned by Fr. Jim during his tenure. He sourced many of the items we now have from Glasgow.

The Icon of Our Lady in the Chapel, Fr Jim bought on a visit to Rome. 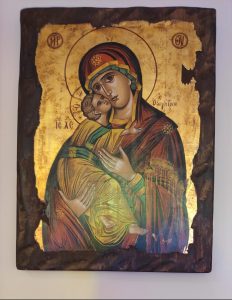 Light of the North

Here is the link to the Latest Edition of our Diocesan Magazine:

Light of the North Issue 48

You are most welcome to come to Mass. Our increased capacity means that we can now accommodate everyone who wants to come to Mass without the need to pre-book. Details will be taken at the door for track and trace purposes.

The Society for the Protection of the Unborn Child (Scotland)

Stella Maris (Apostleship of the Sea)